"Nearly 20 years after the end of the Galileo mission to Jupiter, a team including researchers from LIP found high-energy oxygen and sulfur ions in Jupiter inner belts. " 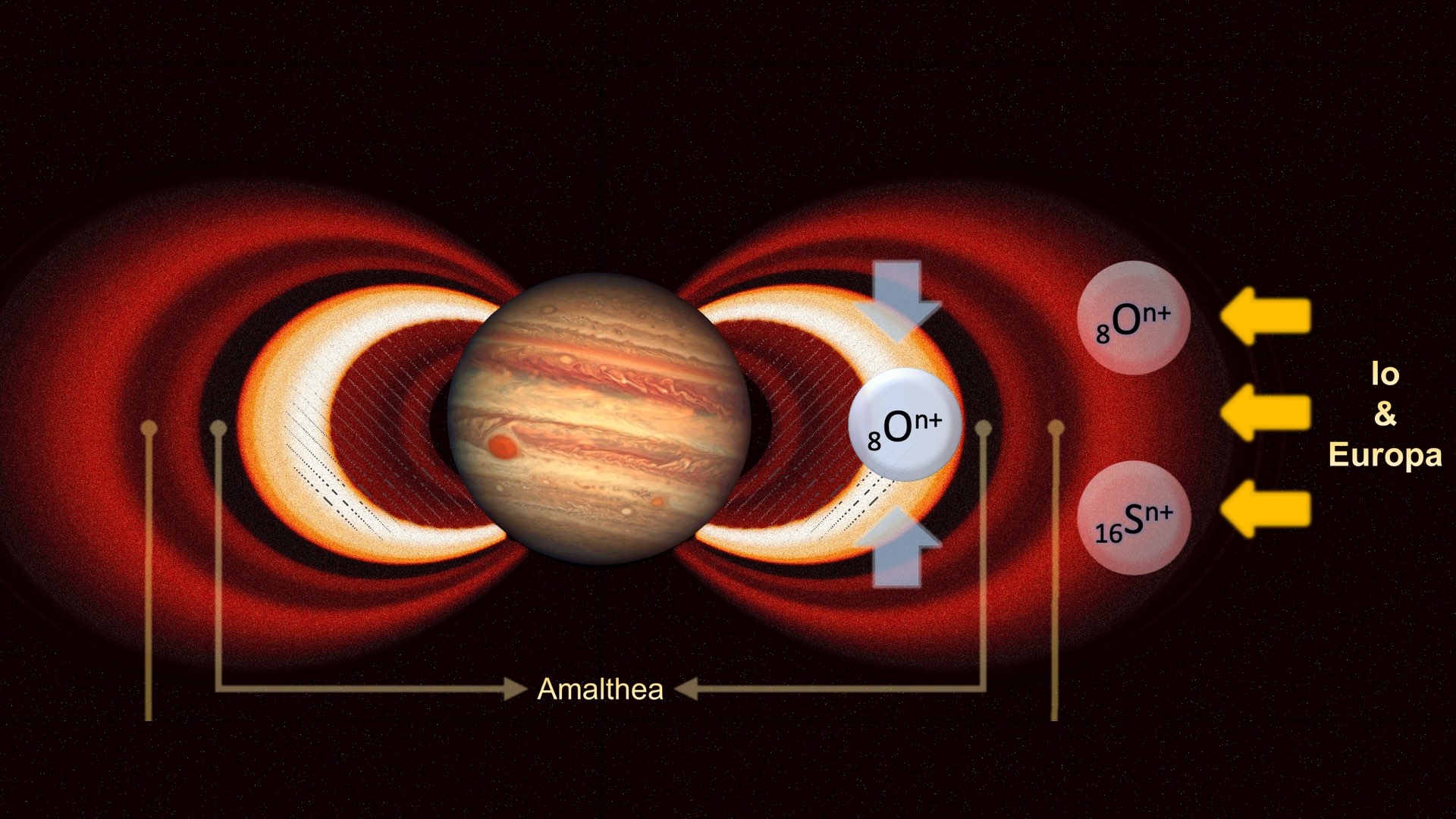 Nearly 20 years after the end of NASA's Galileo mission to Jupiter, scientists keep unlocking secrets from the mission’s extensive data sets. For the first time, the research team was able to determine beyond doubt that the high-energy ions surrounding the gas giant as part of its inner radiation belt are primarily oxygen and sulfur ions. They are thought to have originated in volcanic eruptions on Jupiter's moon Io. Near the orbit of the moon Amalthea, which orbits Jupiter further inward, the team discovered an unexpectedly high concentration of high-energy oxygen ions that cannot be explained by Io's volcanic activity. A previously unknown ion source must be at work. The results of the study were now published in the journal Science Advances. The study was iconducted by a team led by the Max Planck Institute for Solar System Research (MPS) in Germany and including also the California Institute of Technology (USA), Johns Hopkins Applied Physics Laboratory (USA), Laboratory of Instrumentation and Experimental Particle Physics, LIP (Portugal), and Academy of Athens (Greece).

Planets with global magnetic fields of their own, such as the Earth, Jupiter, and Saturn are surrounded by so-called radiation belts: fast moving charged particles trapped in the magnetic field, such as electrons, protons, and heavier ions, forming invisible, torus-shaped accumulations of particles. With velocities coming close to the speed of light, these particles can ionize molecules when they collide, creating an environment that can be dangerous to space probes and their instruments. The gas giant Jupiter sports the most extreme radiation belts in the Solar System.

NASA's Galileo spacecraft reached the Jupiter system in 1995. Equipped with the Heavy Ion Counter (HIC), contributed by the California Institute of Technology, and the Energetic Particle Detector (EPD), developed and built by Johns Hopkins Applied Physics Laboratory in collaboration with the MPS, the mission spent the following eight years providing fundamental insights into the distribution and dynamics of charged particles around the gas giant. However, to protect the spacecraft, it initially flew solely through the outer, less extreme regions of the radiation belts. Only in 2003, shortly before the end of the mission, when a greater risk was justifiable, Galileo ventured into the innermost region within the orbits of the moons Amalthea and Thebe. Viewed from Jupiter, Amalthea and Thebe are the third and fourth moons of the giant planet. The orbits of Io and Europa lie farther outward. In the recent exploration of data from the complex inner regions, LIP has played an important role in the development of simulations, which are sometimes an essential tool to better understand data.

With the help of this scientific treasure, the authors of the study now published have been able to determine for the first time the ion composition within the inner radiation belts, as well as the ions’ velocities and spatial distribution. In contrast to the radiation belts of Earth and Saturn, which are dominated by protons, the region within the orbit of Io also contains large amounts of the much heavier oxygen and sulfur ions, with oxygen ions prevailing among the two. The moon Io with its more than 400 active volcanoes, which repeatedly hurl large amounts of sulfur and sulfur dioxide into space, and to a lesser extent, Europa, are likely the main sources.

Further inward, within Amalthea's orbit, the ion composition changes drastically in favor of oxygen. Actually, the concentration should be decreasing in this region, as the moons Amalthea and Thebe absorb incoming ions. This is for example known from radiation belts of the Saturnian system with its many moons. The only explanation for the increased concentration of oxygen ions is therefore another, local source in the innermost region of the radiation belts. The release of oxygen following the collisions of sulfur ions with the fine dust particles of Jupiter’s rings constitute one possibility. LIP developed GEANT4 simulations of the production of secondary particles - ions and isotopes - in collisions between energetic magnetospheric protons and sulfur ions and ice particles in Jupiter's rings, showing that this is one of the processes that can explain the observations. However, it is also conceivable that low-frequency electromagnetic waves in the magnetospheric environment of the innermost radiation belts heat oxygen ions to the observed energies. Any of these two candidate mechanisms, further establishing that Jupiter’s radiation belts extend into the astrophysical realm.

LIP has developed, together with EFACEC and international partners, the RADEM detector, which will measure the environment of energetic particles and radiation in Jupiter's magnetosphere. RADEM is part of the instruments of the JUICE mission, ESA's next large mission, which will be launched in 2023 to study Jupiter's Frozen Moons.